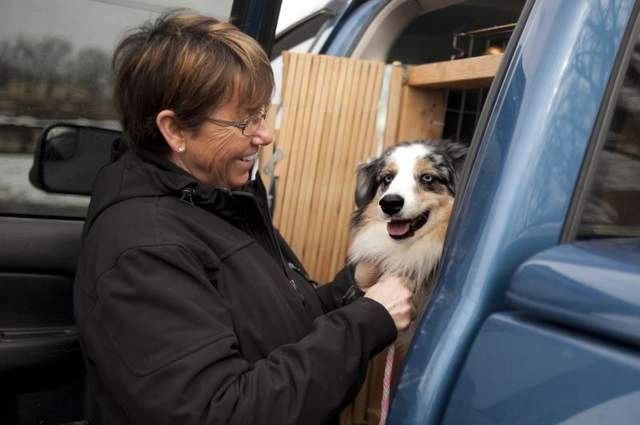 Ellie was a working cadaver dog, so proud of her and Janet.

Maximum Wigglebutt Eleanor Rigby, or “Ellie” for short, didn’t perform as well as her big brother in agility, rally and herding competitions — the miniature Australian shepherd was more boisterous and would “run off to do her own thing” after a few jumps, according to owner and handler Janet Shepherd Winslow.

That left Shepherd Winslow searching for another way to channel Ellie’s high energy and make use of the intelligence and strong work ethic for which working breeds are known.

It didn’t take long for Ellie to find her calling. As of Dec. 15, she’s now the only dog in Tippecanoe County certified through the Indiana Department of Homeland Security in human remains detection.

“One of my main goals in pursuing this is to be able to help bring closure to families whose loved ones have gone missing,” said Shepherd Winslow, a crime scene investigator and Drug Awareness Resistance Education officer with the West Lafayette Police Department.

They’ve walked along the Wabash River before in hopes of finding something connected to Steven L. Smith, a 52-year-old Lafayette man last seen alive on Dec. 6, 2008, near there and presumed dead. His friend, Wesley E. Kelly, pleaded guilty to murdering Smith and is serving a 60-year prison sentence.

The search and rescue idea came to Shepherd Winslow in spring 2009, after human skeletal remains — later identified as a homeless man — were found behind the West Lafayette wastewater treatment plant off South River Road. Some of the cadaver dogs brought to the scene were Australian shepherds, which was a surprise to Shepherd Winslow.

She has long raised Australian shepherds and has had Ellie, who recently turned 8, since Ellie was a puppy.

The duo trained during Shepherd Winslow’s free time at a Homeland Security facility at Camp Atterbury in Edinburgh, about 40 miles south of Indianapolis. Certification was free.

Shepherd Winslow demonstrated Ellie’s skills Saturday at Tapawingo Park in West Lafayette. She hid a small container, which held four human teeth and human blood on a piece of gauze, near a picnic table. It took Ellie less than a minute to find it.

She can even differentiate between human remains and animal remains, which came as a surprise to Shepherd Winslow’s husband, Ed Winslow. They tested it the other day using a piece of deer leg from a neighbor.

“I thought, ‘no way,’ ” Ed Winslow said. “The deer piece didn’t even stop her. She ran right to the human remains.”

Their search and rescue work is not affiliated with Shepherd Winslow’s day job at the West Lafayette Police Department. That means she’ll have to be off-duty while using Ellie at a crime scene.

“It’s not about the money for us,” Shepherd Winslow said.

Even before becoming certified, Ellie and Shepherd Winslow have helped several agencies in the Lafayette area. Last May, Ellie located the body of a White County man whose unoccupied vehicle was found parked at a Wildcat Creek access site outside Dayton.

And in July 2010, they assisted Lafayette police in finding remains of a Lafayette woman on Interstate 65. Her unoccupied truck had been parked on a nearby overpass.

Ed Winslow is considering certification, too, so that he can help with Ellie should Shepherd Winslow be on-duty.

Wicket was a fun, sweet, loving, friendly dog. Gorgeous type, and outstanding structure. Wicket also had fantastic herding instinct time training with Eric in Attica, IN on the farm. Wicket was loved and spoiled by his owners Eric & Rebecca. 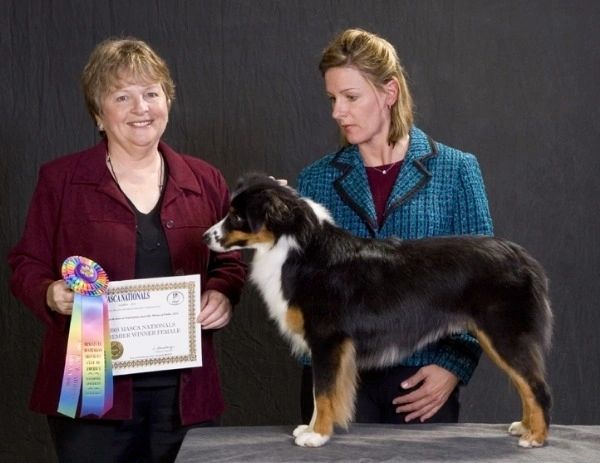 Jett is a beautiful miniature Australian Shepherd. She is a charmer! Jett has fantastic herding instinct, and is an accomplished toe licker! No one is safe on the beach. Special thanks to Donna Hobusch for being a terrific partner. We are so proud of you for learning how to handle, and earning a MASCA Premier award to

Denali lives in Michigan with Deanna and Scott Jones.  She is happy to work disc with Deanna.  Her Blue Merle color stick out from the rest of their family of Labradors.  There is no issue finding Denali in their home.